This is the fourth edition of this visualisation, previous editions were in June 2014, October 2013 and December 2012.

As before, full run throughput in gigabases (billion bases) is plotted against single-end read length for the different sequencing platforms, both on a log scale. Yes, I know a certain new instrument seems to be missing, hang on, I’m coming back to that…

END_OF_DOCUMENT_TOKEN_TO_BE_REPLACED

This is the third edition of this visualisation, previous editions were in October 2013 and December 2012.

As before, full run throughput in gigabases (billion bases) is plotted against single-end read length for the different sequencing platforms, both on a log scale: 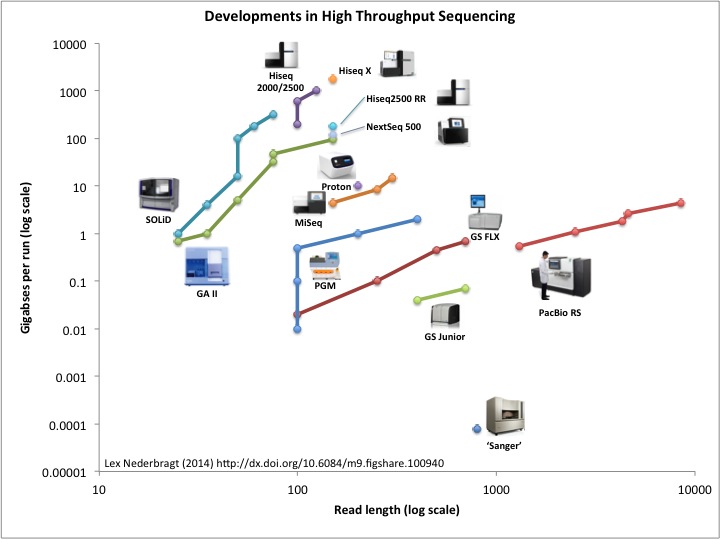 END_OF_DOCUMENT_TOKEN_TO_BE_REPLACED

With this post I present a figure I’ve been working on for a while now. With it, I try to summarise the developments in (next generation) sequencing, or at least a few aspects of it. I’ve been digging around the internet to find the throughput metrics for the different platforms since their first instrument version came out. I’ve summarised my findings in the table at the end of this post. Then, I visualised the results by plotting throughput in raw bases versus read length in the graph below.

END_OF_DOCUMENT_TOKEN_TO_BE_REPLACED

A potential user (‘customer’) of our sequencing platform asked how to generate reference genomes for his 4 bacterial strains. His question inspired me to write this post. The suggestions below are not absolute, just my thoughts on how one these days could go about sequencing a bacterial genome using one or more of the sequencing platforms. I would appreciate any feedback/suggestions in the comments section!

END_OF_DOCUMENT_TOKEN_TO_BE_REPLACED

Nick Loman was kind enough to give me an advanced copy of his paper in Nature Biotechnology entitled “Performance comparison of benchtop high-throughput sequencing platforms” (Loman et al, 2012). I thought to present a quick summary of the paper here and add some comments of my own.

The paper sets out to “compare the performance of three sequencing platforms [Roche GS Junior, Ion Torrent PGM and Illumina MiSeq] by analysing data with commonly used assembly and analysis pipelines.” To do this, they chose a strain from the outbreak of food-borne illness caused by Shiga-toxin-producing E. coli O104:H4, which caused a lot of trouble in Germany about a year ago. The study is unique in that it is focuses on the use of these instruments for de novo sequencing, not resequencing.

First, they used the ‘big brother’ of the GS Junior, the GS FLX, to generate a reference genome (combining long reads obtained using the GS FLX+, and mate pairs using Titanium chemistry). Then, the same strains were sequenced on the benchtop instruments, and these reads were compared to the reference assembly. The reads were both compared directly, and after assembly with a few commonly used programs.