This is the fourth edition of this visualisation, previous editions were in June 2014, October 2013 and December 2012.

As before, full run throughput in gigabases (billion bases) is plotted against single-end read length for the different sequencing platforms, both on a log scale. Yes, I know a certain new instrument seems to be missing, hang on, I’m coming back to that…

Notable changes from the June 2014 edition

But, where is the Oxford Nanopore MinION?

The Oxford Nanopore MinION is a bit tricky. My metrics are based on company specifications that anyone can view from their website, for commercially released instruments and (chemistry) updates. The commercial release of the MinION seems now to have happened, as it was announced everyone can apply for the MinIon Access Program and will be accepted (barring some sanity screening they probably will do). But metrics for this instrument are a different matter. There are no company specs that I can find. Partly this is understandable, as read length, for example, is dependent on the input length of the sample (or library, rather). The other reason for the lack of specifications may be the Minion Access Programs philosophy of Oxford Nanopore. It is the users that are discovering what the instrument can do, rather than the company telling the customer what to expect.

For my visualisation, this lack of specification causes a problem, as this makes it impossible to point to a source for where to place the MinION on the plot. Hence it is lacking from the figure above.

As a (temporary?) solution, here is, purely based on what I read in articles, both published scientific articles, preprints, and webpages, where the MinION more or less belongs. Note that I choose to represent it with a cloud rather than a single, solid datapoint… 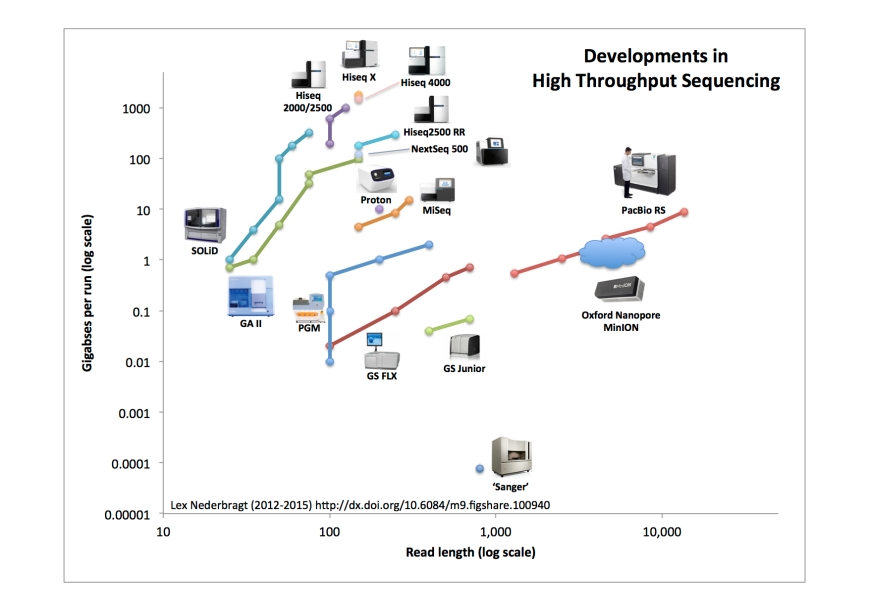 Availability
Data and figures are released under a CC0 license at figshare, with doi 10.6084/m9.figshare.100940. I’ve also added the content to Github at https://github.com/lexnederbragt/developments-in-next-generation-sequencing.

Disclaimer
As before: although I took utmost care in collecting the data, I may have gotten some of my numbers completely wrong, for which I apologise in advance; please help me correct any mistakes or omissions through leaving a comment, or sending me a pull request.

[1] mode or average
[2] Sources: see this file from the github repo.