A quick summary for the impatient:

An analysis of the homopolymer distribution of the recently released ‘longer’ Ion Torrent reads indicates a possible significant over-calling of homopolymer lengths towards the ends of the reads. Trimming the ends off, however, only marginally improved de novo assembly of the reads using newbler.

Life recently released ‘long’ IonTorrent reads (B14_387, resequencing of E coli strain DH10B, available through the Ion Community here). There is an accompanying application note that brags about the read’s accuracy, especially over reads from the MiSeq platform. These accuracy measurements are logically based on alignment to a reference genome.

But what about de novo assembly? Thing is, the dataset presented, with a peak length of 241 (see below) and 350 000 read, is quite similar to what a full plate of GS FLX gave you in 2007 (peak length 250 bases, 400 000 reads). And 454 reads were very useful at the time for de novo assembly (in fact, the only reads available for this purpose, obviously besides Sanger reads).

Nick Loman had a stab at using these reads for assembly with newbler, the program developed by 454 Life Sciences, on his blog. He reported, compared to the shorter Ion reads, much worse results for the longer reads. On twitter, he wrote that the assembly programs MIRA and CLC Bio performed really bad with these reads.

So I wondered what could be the problem with these reads, that presumably show good mapping accuracy, but perform not very well for assembly. For comparison, I generated a similar 454 GS FLX dataset, 350 000 reads with a peak length at 250 bases. I used sff files that came with the software installation discs of newbler version 1.1, these represent a resequencing run on E coli K12 strain MG1655. I randomly selected at the exact number of reads as are in the Ion Torrent B14_387 dataset.

First, I looked into the sff file and noticed that the run had 520 flows, twice that was used earlier. Using my ‘2.5 bases per four flows’ calculation I described before, this translates in a potential 325 bases. In a run I discussed earlier , I noticed a 32 base repeated flow order which presumably yields better results, and this flow order was used for this run as well [thanks to Nils Homer for pointing out my oversight here, I’ve ordered new contact lenses…).

The Ion reads peak slightly lower than the 454 reads (241 and 253, respectively). But, they also show a strange peak around 400 bases. On the Ion Community forums, this peaks was discussed, but I couldn’t find a satisfactory explanation for it.

For problems with the data generated by both 454 and Ion Torrent, the usual suspect is homopolymers, consecutive runs of the same bases. Due to the way the bases are read (basically not reading single bases, but the length of homopolymers). I calculated the frequencies of homopolymers of all lengths present in both the Ion long reads dataset, the B13_328 dataset (100 bases run), the 454 dataset, and the E coli K12 MG1655 genome (both forward and reverse strands). (The results for DH10B were identical to MG1655 and are therefore not shown), see the graph. 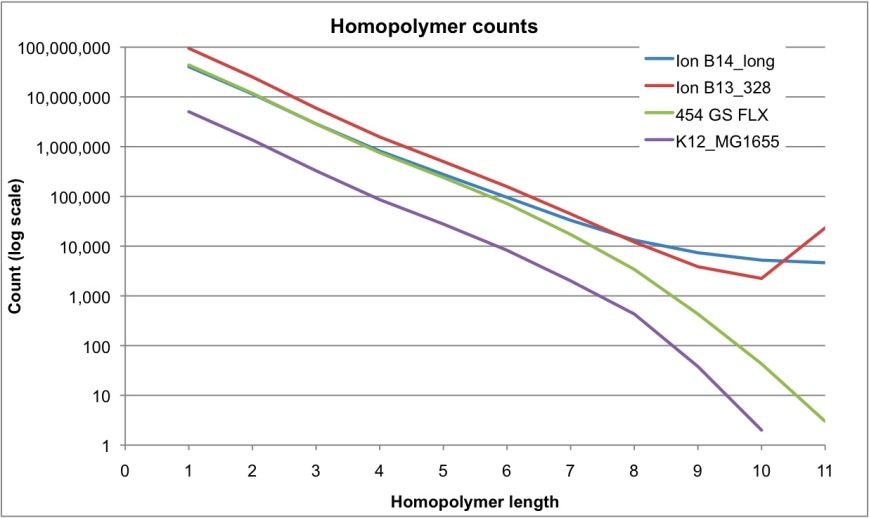 In the figure, the counts of the homopolymers of lengths 1-11 are plotted, with the Y-axis on a log scale. A homopolymer length of 1 represent all single bases (monomers), length 2 represents all occurrences of AA, CC, GG and TT, length 3 represents all AAA, CCC, GGG and TTTs, etc.

The line representing the E coli genome (the lowest one due to the 2x coverage, while the run data have much higher coverage) showed a steady (exponential) decline in the counts, accelerating beyond 8-mers. The 454 reads nicely follow this line and showed the same pattern. The Ion reads, on the other hand, deviated significantly. The showed a slowing down in the decline beyond 8-mers. So, it looks like the Ion reads have significantly more longer homopolymers than expected based on the composition of the genome. This could mean that there is a profound over-calling of homopolymers in these reads.

I next tested whether these longer homopolymers were located uniformly along the reads, or where perhaps clustered more towards the ends. To this end, I counted the starting positions for all homopolymers of each read, for the 454 and B14 long read datasets. 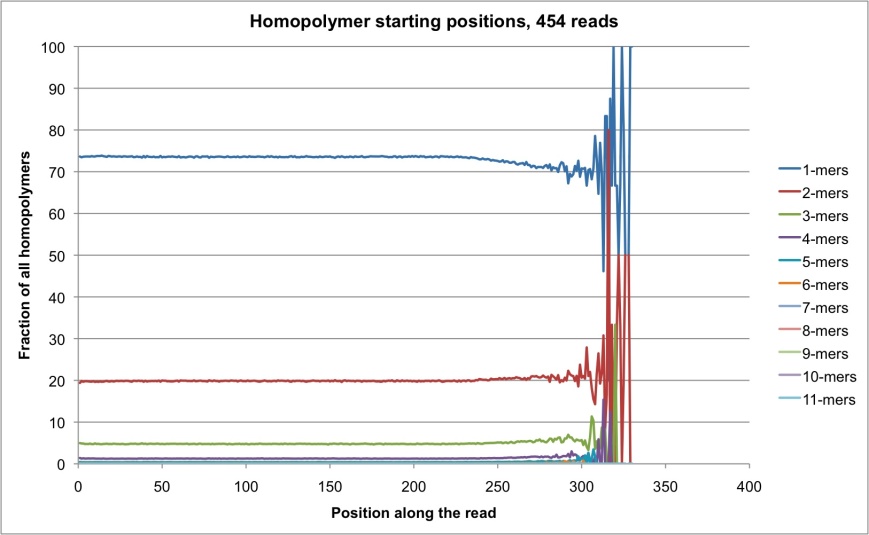 The 454 reads, above, showed a uniform distribution of homopolymers of the different lengths along the read up to about 320 bases. The pattern for the last bases is a result of the very few reads that are of this length, so that N is very low for these positions. 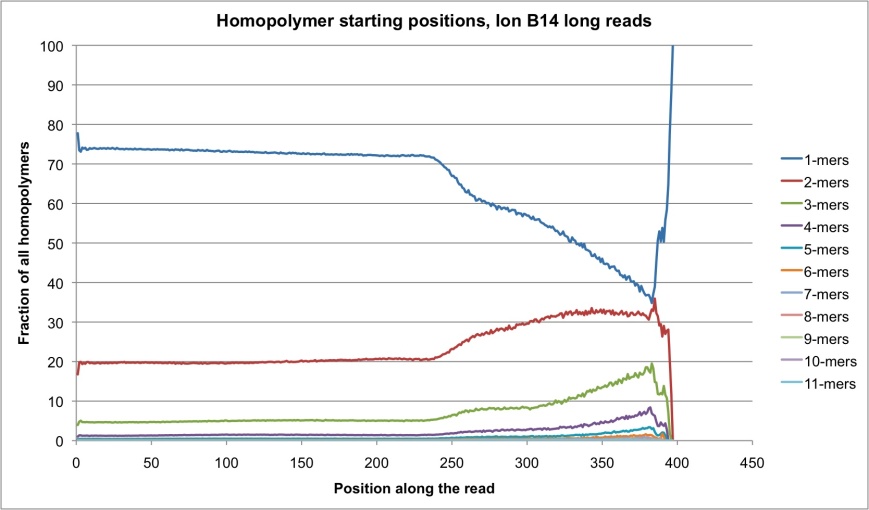 The long Ion reads, on the other hand, show a significant reduction of the fraction of 1-mers beyond base 230, and an increase of the 2-mer and longer homopolymers. The very long reads (the peak around 400 nt) show the opposite, a reduction in the number of homopolymers in favor of monomers.

In an analysis of the test fragments spiked into the IonTorrent runs, lek2k showed on his biolektures blog (posts here and here) both undercalls and overcalls for two-mers in the test fragments deep into the reads [thanks to lek2k for correcting me on this, see his interesting comment below]. My results indicates that overcalls are the bigger of the two problems.

These analysis indicate (but in no way prove) that homopolymer overcalls could contribute significantly to a lower accuracy at the end of the longer IonTorrent reads. Is this problem then explaining the low assembly performance of these reads?

In order to test this, I created new sff files for both B14_387 and the 454 dataset, with the reads trimmed beyond 230 bases. Then, I performed assemblies for the original files, and the retrimmed files using newbler 2.6 with default settings.

(‘Large’ contigs are those of at least 500 bp). The table shows not that much difference between the full-length 454 reads, and those trimmed at 230 bases, with only a few more contigs and a 20% lower N50. for the latter assembly.  The full-length Ion reads assembly is similar to the one Nick Loman produced, three times more contigs and an N50 that is a fifth of the full-length 454 assembly. Note that many reads are only partially assembled (meaning that a part of them could be used for alignment against the other reads, the rest was too different), whereas close to 99% of the 454 reads are fully assembled. Finally, the assembly using the trimmed Ion reads is only marginally better.

In conclusion, these results indicate that I have found a problem, but that it most likely is not fully able to explain the poor performance of the long Ion reads for assembly. Also, the GS FLX reads (peak length at 250), around for more than four years now, perform significantly better than Ion reads of comparable length for de novo assembly.

Finally, I’d be interested to see an analysis of the homopolymer errors based on mapping the reads to the reference genome for both these datasets. Since this is something that would take me way too much time, I hope somebody else will do this analysis (I can help if needed, and you’re welcome to write a guest post on my blog if you want)!

Homopolymer counts
I used the following script (thanks to ‘Deep’ for pointing out a bug in this script, see the Comments section. The results changed slightly after fixing the bug but this did not influence the conclusions. Below is the correct version):

This produces a table with homopolymer length in rows, and bases in columns and the counts as values in the cells. I than (using excel) summed over the rows to get the totals, and plotted these in excel.

Homopolymer starting positions
For this, I used a modified version of the above script (thanks to ‘terry’ for pointing out a bug in this script, see the Comments section. Again, the results changed very slightly after fixing the bug, and again this did not influence the conclusions. Below is the correct version):

The output of this script is a table with the base positions in the rows, and the homopolymer lengths as columns, the counts as values in the cells.

Resetting the trimpoints to 230 bases
First, I created a trimpoint file:

Then, I used the sfffile command to generate a new sff file, with new right trimpoints for those reads that are over 230 bases:

Assemblies
All assemblies were done with newbler 2.6 with default parameters, e.g.

For the summary of the assembly statistics, I used my newblermetrics script. > <